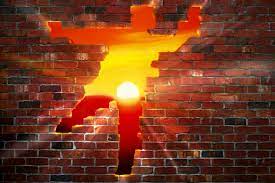 While it may not seem like it, we are currently having wonderful things happening all around us, uplifting and enlightening things. Unfortunately, the challenges that are forcing us to break patterns that no longer serve (that make those wonderful things possible) make it seem like only bad things are happening. That is so not true, even if we can’t see it yet. Our sight, inwardly and outwardly, is being revamped. Even though we asked to be part of this when we came into this life, most of us are unconscious of that choice so these challenges are seen as bad and limiting instead of a gateway to a new awareness.

It’s been a hard year. It is still a five year, after all, a number of chaos and chaos coming into order. The first half of the year was supposed to be the chaos that prepared us to start consciously bringing it into order in the second half. But, as we know, good old free will via ego got in the way and those who refused to accept chaos as a lesson caused the lesson to continue, now hitting us harder than it has in the last eighteen months.

That free-will-via-ego choice effectively separated humanity into two groups: those who have already gotten it, or are getting it (it being the Aquarian Age enlightenment) and those who refuse to budge from the fear-driven ego (the Piscean Age hold-outs). We’ve been separating ourselves for years, but the difference between the two groups now is as wide as the Grand Canyon.

But with this year of chaos and merciless lessons, the choice of moving forward or staying stuck is now irreversible. And even with that as a reality, there are still opportunities for those who are stuck to learn something. It seems Higher Source and the Earth never give up on us, even though the lessons being taught now to the hold-outs will probably be put into practice in their next life, not necessarily in this one.

So the rest of this year (and the energy of which wraps around to the end of January 2022 when the Chinese New Year of the Tiger changes our vibes on February 1), the two groups have very different roles. Those who are staying stuck are being given an unrelenting crash course to break them out of our own egos while those who are moving forward seem as if they’re at a standstill.

Back to the classroom analogy I like so much: remember what I’d written before that everyone on the planet is as if in a classroom taking an hour-long test. Those who finished the test early still had to wait until everyone was done (or the hour was up) before we could get out. It made everyone feel stuck when those who completed the test felt like we should be moving forward. It made us very frustrated.

Well, now, that hour is up, but those who are still stuck are suddenly given an extra hour and those who are done, have passed and are moving forward are now in an adjacent room, waiting until that extra hour is up before we can leave and get on with our lives. Meanwhile, the moving-forward group can see those still struggling to finish the test (basically, struggling with their own egos) as if they’re watching through a two-way mirror. Those who know the answers are now so frustrated because they want to yell at the hold-outs “The answer is six!!!” but know they can’t help or even be heard.

There are times in human development when no one can help another, the lessons are only for each individual. We are in one of those times. Think about trying to convince anyone you know who disagrees with you. It’s not going to happen. People are holding onto their beliefs with rabid fervor because it’s one of the few things they are sure about, even if their belief is rooted in fear. If they let that go, what do they have? Who are they?

So, what I’ve said before for the rest of this year still applies: keep your head down, hold onto the safety bar and relax (which is the hardest thing we can do right now but trust is the answer to everything). As October progresses, however, it will become easier and easier to do that.

We’ve been in a punishing retrograde season this summer, especially when Mercury joined all the outer planets (Jupiter, Saturn, Uranus, Neptune and Pluto) at the end of September. We started getting relief from the heaviness of the energy last Wednesday when Pluto went stationary (see below), heading toward direct, after being retrograde and teaching us generational/rebirth lessons for almost six months. Those lessons were hard, as they are with all retrograde planets, because we were getting new information but were unable to put any of it into action. That’s about to change.

Saturn was next to move out of retrograde yesterday (October 10), having been retrograde for almost five months. Now it starts giving us a clearer path forward, defining our karma and helping us have discipline (all of which were lacking during its retrograde period).

Then on October 18 (a week from today), both Mercury and Jupiter go stationary, heading toward direct, giving us relief in communication, starting new projects, signing legal documents and having surgery and expansion, good luck and being able to easily receive what we are due after months and months of hard work that seems to have produced nothing.

REGARDING STATIONARY VS. DIRECT

Retrogrades have been known to cause stagnation, and we may feel some initial momentum this month. Life seems to be picking up and moving in a new direction. However, these planets are only stationing and they won’t move much in terms of degrees. We still have to make it through their post-retrograde shadows, and their cycles won’t really be complete until January of 2022.

As Jupiter, Saturn and Pluto move through their shadows, we’ll come to a better understanding of what the last six months were all about. Their post-retrograde shadows can also bring us second chances. While the retrograde itself is a reflective stage, the post-shadow is really the do-over portion. When the shadow is over, we’ll have the ability to utilize what the retrogrades taught us.

When a planet transitions from direct to retrograde or retrograde to direct, it slows down and appears to come to a halt before changing direction. So when a planet stations, it means that it is “stationary” and has stopped moving in preparation for its directional change.

Now that the planet will be moving forward, people are more likely to come together with the intent of a better tomorrow for all. With both Jupiter and Saturn back in Aquarius, there is a greater emphasis on unity at this time. Jupiter will officially exit its shadow on January 8, 2022.

October 2021 is only the beginning of Act II (Act I being the retrograde season). We don’t have all the details or information yet, but we have enough material to begin to move forward. By the end of the month, Uranus and Neptune are the only planets that will remain retrograde. Still, October presents the chance to start setting the stage for the coming year.
INTO THE END OF THE YEAR
Even with the ease of October giving us some forward motion, we’re on a slow ride through the rest of the year. We in the Northern Hemisphere naturally slow down as winter approaches with the growing season over. That’s part of our DNA from having been an agrarian society for millennia. And with the ease we’re experiencing, we need it while we’re still fighting it because nobody likes to be told to slow down and go with the flow if it’s not their choice. But Higher Power is at work and if we do slow down and go with the flow, the rest of this year goes very well.

Two things to know that are happening right now: with the difficulty of the chaos energy staying with us until the very last second, none of us are using all our awareness. It’s like we’re numb to everything that is overwhelming, and everything feels overwhelming now. Over the summer, we went down to a normal 100 percent coherence to 80 percent for women and 70 percent for men. But since Mercury retrograded in late September and with the lessons getting harder, we’ve dropped to 70 percent for women and 50 percent for men. That’s not a slam at men…all men have a harder time right now because their transition demands a lot more. How they see themselves, their role, their responsibility is changing in a really big way.

The other thing to know is that people are already focusing on the holidays as a way to make themselves feel better. We’ve been doing this for years now – bringing holiday prep and anticipation earlier and earlier as each year has gotten harder. Last week, I saw that Amazon has “launched” Christmas early, offering Black Fridays and actually having a choir sing Christmas carols in Times Square. A marketing ploy, yes, but a great example where people’s minds are in wanting to wrap themselves in that feeling of holiday happiness.

None of this is bad, it just is. So acknowledge that within self and in others. The crazies in the world are being taken care of. Stressing over somethings that we can’t change only makes our lives harder and our health can take a hit.

Keep your head down! Hold onto the safety bar! Relax! Trust!

We’ve got this, even if in this moment we might not feel like it. Fake it til you make it.