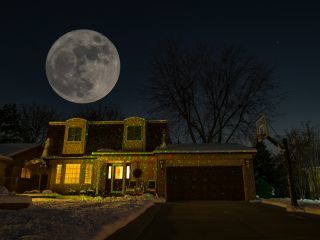 This last week was energetically crazy!!!! The Full Supermoon on Sunday, February 9 (remember that? – it seems so long ago) took us to a new level of the Game of 2020. New rules, new vibes, new reactions, new deeper self-awareness. A lot of us became over-sensitive, felt raw and vulnerable, didn’t sleep or didn’t sleep well, over reacted emotionally, and felt ungrounded.

Going from grade school to junior high/middle school had a similar effect. It was exciting and scary, probably bigger than what we were used to, with a new environment, new people, new challenges that were theoretically the same as in the previous school but were on a brand new level. Whether or not we were ready for that next step, we had to take it.

What happened with the Full Supermoon was indeed us leveling up to the next chapter in our evolution as a species, just like a video game, except we’re playing in the real world. It helped each individual face the ongoing lesson of what needs to be faced within to become the best s/he can be. It hit hard…harder for those who aren’t ready for that next chapter because they haven’t done their work or are in too much fear to learn any of the personal, world and spiritual lessons 2020 has in store for humanity. And, unfortunately, even if you weren’t having a hard time, those who were made sure you shared theirs.

This push to level up isn’t stopping or slowing down. It’s going to accelerate as we get further into 2020. Every planetary event takes us up to a new level/awareness. Every. Planetary. Event. As we know, there are a lot of them this year, far more than usual. We will level up with with every Full Moon, especially the next three as they are Supermoons. And pay special attention to the eclipses as they can hit us like we’re on steroids.

The same intensity of new self-awareness hits us when the inner planets retrograde:

Note that the shadow periods before and after Venus and Mars retrogrades, with the next Mercury retrograde (June 17 through July 12) connecting them, feel like it’s one long self-awareness lesson. Then there are the New and Full Moons (with eclipses) that heighten every effect. However, when we feel out of focus, we’re forced to find a new focus within. When we’re limited in one way (being unable to control our energetic and sometimes physical reality because of these events), we stretch to find other ways to cope and grow.

This might sound like a dire warning, but it’s really an opportunity – it’s all in how we look at it. If we go into a new school fearing and dreading it, it becomes difficult and we learn little – our fear gets in the way. If we go into a new school excited to learn, we attain a higher version of ourselves no matter how difficult the lessons are. The more difficult, the more we accomplish.

Please note, however, that when we feel the energetic and vibrational changes and aren’t consciously aware of them because we’ve never been taught to think in those terms, we assign that discomfort to something we’re already feeling and that feeling suddenly becomes overwhelming. Anxiety to ANXIETY!!!! Fear to FEAR!!!

Anxiety was very high last week. If we don’t know that’s the energy of a level up, our personal anxiety and fear become so much more intense, increasing our fear that we’re getting something wrong. A friend was preparing for a meeting in Washington DC last week and was riddled with anxiety even though she knew what she was bringing to Congress was important, had publicly spoken of it multiple times, and was passionate about what she was presenting. But she was overcome with anxiety and fear causing almost constant crying in the days before the meeting. Without knowing the level-up energy was in play, her self-judgment and fear that she couldn’t handle what she started years before and that everything was going to fail played up almost to completely overcome her. Then, in realizing that everyone (as far as I have found) was feeling extremely anxious for “no clear, logical reason”, it eased some of her worry. She understood she wasn’t to blame and was able to look at where the blame originally came from (a childhood event).

Try to observe within self how feelings hit as we adjust to this new level and ask self “why?” Does it make sense to suddenly be afraid or filled with anxiety? Is it a higher level of fear and anxiety than is normal? Be discerning in observing self and give yourself a break. Relax and see what you’re supposed to learn. How can you see things differently? We’re being stopped in our old “bigger, harder, stronger, faster” rush forward to get through life or this year to a better, easier, happier, more successful path, but that’s not how it works. A baby doesn’t suddenly decide s/he doesn’t want to go down the birth canal when halfway through – being born is the goal. We are in the process of being born into a new level of being human. Go with the flow. Everything has a reason and purpose, even if we can’t see it now.

This is from a post from Alex Myles about how Mercury retrograde (February 16 through March 9/10) hits us over these next three weeks:

Mercury is the messenger of the Cosmos. During its retrograde it spins backwards and delves deep into our pasts. It churns up any messages or lessons we have missed or haven’t been open to learning and accepting.

Expect heightened senses and enhanced intuitive abilities, extremely vivid dreams and possible nightmares, mishaps and malfunctions when we hurry around, miscommunications when we don’t pay attention, feeling compelled to slow down, rest and regroup, people from the past reappearing for closure, synchronicities and numbers 11:22, 20:20 and 333.

Mercury retrograde can sometimes feel extremely difficult, challenging, turbulent and possibly even quite traumatic at times. However, even though it may not feel like it at the time, Mercury retrograde brings specific things to our awareness for a divine and higher reason. The misunderstandings, miscommunications and misalignments are all highly significant and part of a much bigger sacred plan that usually unfolds and becomes clear toward the end of the retrograde. Mercury retrograde is the cosmos’ way of showing us what happens when we don’t pay close attention to the small but important detail in our lives and the people we choose to surround ourselves with, and, more notably, the chaos and confusion that occurs when we aren’t fully present, mindful or aware.

The reason we are so highly affected by the planet Mercury is because it has a high density and is believed to be mostly made of iron. It is similar to a huge magnet orbiting the sun and the closer it gets to Earth, the more effect it has on it. During Mercury retrograde, Mercury is in its closest position to Earth, and as it is the fastest planet in our solar system, it is known to make us feel quite disoriented when it is so near.

Mercury is the “messenger of the skies” and during its retrograde is perceived to spin backward so it can deliver previously unseen messages that are vital for our soul journey. Quite often the only reason the messages are yet to be seen is that they hit our blindside, as we were not willing, or emotionally ready, to deal with them at the time. Many people, especially those who are highly sensitive to celestial energy, report that they suddenly feel pushed, pulled, irritable, dizzy and quite often a little emotionally unstable when Mercury enters retrograde.

Mercury is the ruler of intelligence, the mind and all forms of communication, and is associated with contracts, listening, learning, negotiating, purchasing, selling, speaking, travel plans, technology, electronics, GPS, and lost items. It is well known to be a trouble-making planet while in retrograde. Therefore, normal conversations, interactions and plans that would normally be straightforward could be full of complications and will likely go haywire. Anything that we haven’t properly maintained or paid enough attention to – from relationships to electronics – may break down, malfunction, regress or erupt out of control during this time. Retrogrades are powerful portals that clear blockages and give us the opportunity to experience a major shift in energy. If we are attentive and willing to learn the lessons they provide, we will come out the other side of this energetic storm stronger, wiser, sharper and more emotionally, mentally and spiritually aligned.

Life might feel as though it is dismantling and deconstructing over the next couple of weeks. It is important to try not to cling to anything and to trust that sometimes certain things need to crumble or dissipate to clear the way so that what is meant for us can break through.

Insights and revelations may flow in thick and fast, particularly when Mercury moves through Pisces, as our intuitions, sensitivities and psychic abilities will all be heightened. Hidden truths may surface as we suddenly have the enhanced ability to see straight past illusions and masks. This retrograde asks us to replace our worries and fears with newfound faith that everything is happening exactly as it needs and is meant to. It is a reminder that we do not always need to understand the exact reason why things appear to u-turn and go wrong, or why some connections fall away during this phase. Sometimes the Universe intervenes and decides what needs to go and what needs to stay – particularly if our lives aren’t balanced energetically and we are falling out of alignment.