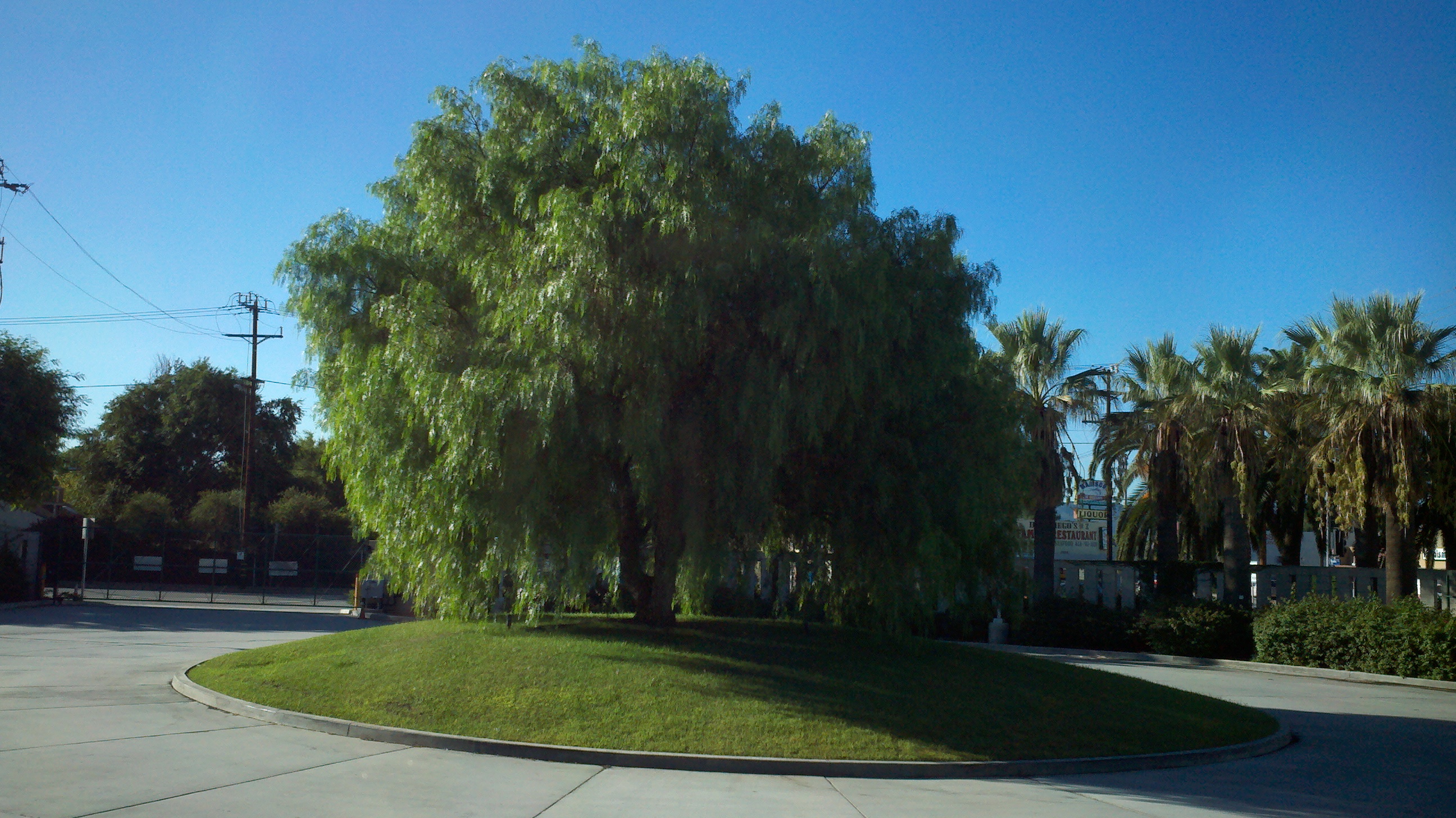 Back in the 1990s when I was living in the San Fernando Valley north of L.A., I fell in love with Peruvian pepper trees. There were three that stood in a row along Moorpark Avenue near my apartment. I had never seen pepper trees before but their energy, strength, beauty, and smell entranced me. Later I realized that I felt a subconscious connection with them because I had a significant past life in Peru a long time ago so these trees made me feel like I was home.

I visited them often just to stand under their branches. I’d breathe in the fresh oxygen coming from their sweet leaves and lean my back against their thick trunks for connection and healing. About nine months after I “discovered” them, Patrick (my then significant other) and I walked by and found they had been “pruned” to the bone. Almost all of their branches had been cut back drastically in the way unconscious and uncaring LA county workers do to make their jobs easier so they won’t have to come back for years.

I immediately burst into hard tears as if I had come across the body of someone I loved who had been murdered. That’s what it felt like. Patrick stared at me in shock at my reaction. I was also very surprised. This was a gut reaction with depth of grief and emotion seemingly unequal to the situation. But I was not only feeling the wrongness of it all, I was feeling the pain of the trees. These beautiful, majestic, life-giving creatures had been given no warning before they were butchered. If they had, they would have been able to pull their energy back to protect themselves from harm. But they had been attacked and damaged in such a way and with such carelessness that it would take decades, not just years, to recover.

I have experienced other connections with Nature, generally and individually, especially with animals, but nothing as heart-rending as that. It was as if someone had lopped off both of my arms above the elbows. That’s how it felt to the trees – and the Earth – because of the violation and violence. It created “a disturbance in the Force.”

My mentor, Carolyn, had a similar experience without the recognizable violence when she visited the energy vortexes outside of Sedona. She sat alone with the rocks in the desert and could hear the Earth moan in pain and sorrow. She could feel the Earth hurting because of what mankind has done to her in our selfishness and ego.

So, to my question that started this train of thought…

In the evening on Saturday, September 2 around ten p.m. Central time (or the appropriate time in your area), did you have a sudden feeling of shock, depression, sorrow, heaviness, confusion, injustice or anger coming out of nowhere that did not fit with your surroundings or what you were doing? That’s when North Korea tested their hydrogen bomb (Sunday, September 3 at noon their time).

This bomb was measured in Japan as equaling a 6.5 earthquake, which other countries measured anywhere from 5.7 to 6.2. This was equal to the bombs used on Hiroshima and Nagasaki that horrendously and effectively ended World War II. It was significantly larger than Kim Jung Un’s previous test last year on September 9, done to celebrate the anniversary of the founding of their totalitarian regime. Nothing speaks of celebration like unnecessary destruction and long-lasting damage to the planet and all life on her because of little boy ego.

I don’t mean did you feel the Earth under your feet shudder and shift. With our growing sensitivity to vibrations and more energetic connection with the Earth herself, we are able to feel an immediate reaction to such an inexplicable violation done to our planet in ways that are not necessarily physical (as a shudder) but emotional (sudden shock, sorrow or feeling violated).

The issue here is are we sensitive or aware enough to be able to recognize it?

Growing in sensitivity doesn’t necessarily mean we automatically “get it”. Like with anything new that we are learning, we have to pay attention to it, recognize the difference of one feeling from another and hone it to use this skill at will. And we can easily get in our own way in learning this because, as usual with Aquarian Age lessons, there is no template.

Over the years, as the Aquarian Age vibration has increasingly become more pronounced, human beings have been innately working to harmonize with it. We have seven levels of awareness within ourselves (three physical, four energetic) that, if allowed, naturally rise to be in sync with the Earth. As we do that, we become more sensitive to everything around us, even when we are not consciously aware of it.

When I reacted to the tree massacre in the 1990s, I had to see it to react to it. Nowadays, I can feel things as they happen. Still, it’s hard to recognize the truth of soul-reaction because our senses and personal vibes are constantly bombarded with so much. For example:

As we deal with the intensity of Hurricanes Irma, Jose and Katia, the aftermath of Harvey and the 8.1 earthquake in Mexico, it’s difficult to separate what we might have felt or feel if we watch the news. The sometimes-constant coverage can either desensitize us or hype us into feeling what’s going on as if it’s happening to us. It takes us out of touch with our genuine, energetic reaction and innate connection to the Earth.

After watching Irma coverage for a couple days, I felt compelled to fill my bathtub with water and gather my cats in a safe place “just in case”, even though I was no where near any danger. That’s how powerful the visuals can be and how convincing the reporters convey the threat, which is their job. They don’t just “tell the truth”, they sometimes enhance the truth to guarantee ratings, especially, when there is a legitimate reason to do so.

But if we can separate ourselves from human/electronic input to be in touch with our inner vibes, we can differentiate how and why we react to everything, especially disasters, natural and man-made. I didn’t know why I was suddenly overcome with sorrow and anger on Saturday night until I saw on the news the next morning that North Korea had tested their weapon. I knew something was off in the moment. I couldn’t tell what but I knew it was bad and not natural.

The damage done by Harvey, Irma, Jose and Katia and other hurricanes has a different feel than what is brought up by a nuclear blast as they are natural. These storms can be massively destructive, but they are a natural part of the Earth. Granted these are much stronger than they would have been if mankind had repaired the damage we’ve done to the Earth before we got to this point. But the destruction to property can be repaired within months or years even if the psychological and emotional damage takes a little longer.

The damage done to the Earth and her creatures from a man-made hydrogen bomb or any nuclear device is immense and long lasting – on a physical level and on an energetic one. Take only the physical aspect of it: the radiation spreads over the planet and affects everyone in small but significant ways. This doesn’t take months or years to set right, it takes centuries or longer in a way that is very unnatural and is recognized as such within the Earth.

If we can feel the Earth’s awareness, the energetic and vibration reaction to such a violation, we can recognize it as a soul-event. It’s vastly different. When we blast away at her for modern coal mining and fracking, we get a similar but less intense response. Still, it changes our soul. It makes us more sensitive which can lead to bringing up more self-protection when the point is to learn why we’re reacting and let it teach us to feel without that protection.

These events, natural and man-made, cause physical and emotional vibrations that we can feel no matter how far away we are from the damage. If we want to truly embrace the shifts in ourselves and our world as we move into the higher vibration of the Aquarian Age, regularly take moments to center self, spread awareness out and feel what the Earth has to share with us. In my Psychic Development classes, this is something we learn to do with each other. Extending to the Earth is actually easier because she has no “monkey mind” to clutter her thoughts and feelings.

Try it. Hone the awareness as it comes to us. Connect with the Earth. Her reaction to the hydrogen blast is still very much available, so is her energy with the storms. This way, we can not only recognize how she’s doing but be aware of what’s coming up. With her being less careful with us as she was before the Great Eclipse in August, we all need a little heads up, not just for self-preservation, but to attune our personal awareness to connect with all life.