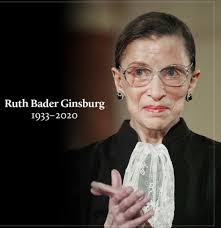 Did anyone else feel the fear and restlessness over the weekend? There was a lack of balance, a strong need to be comforted (especially in my cats) and a loss of energy to do anything because whatever we did do felt like it wasn’t right or enough. That’s directly related to the Jewish New Year energy shift (starting at sundown last Friday) and the loss of our Notorious RBG on the same day.

There’s a trick in writing for the entertainment industry when the screenwriter understands the details of a fight or war scene or action sequence are too much to express blow-by-blow with the written word, so a catch phrase is used: “And chaos ensues…” That hands it over to the director to do what s/he does best.

This last week, our director of Higher Power, whatever we want to call it, took charge in an “upped-the-ante” way that was both expected and unexpected. That new level of chaos is the way the rest of this year is going to be, at least until Winter Solstice on December 21. Then the awareness of who we are and how we deal with things changes, but the stupidity of some people will probably not.

While there are very positive things to look forward to, with the expected and unexpected death of the Great Lady, Ruth Bader Ginsburg, we turned a corner into that ensuing chaos. Whether we follow politics or not, her death left a tremendous void, political and energetic, and left us in an ensuing chaos that will be felt for a very, very long time.

“When someone dies right on Rosh HaShanah, especially when it also falls on a Shabbath, it is a sign that the person was a Tzaddik, saint. The Hebrew word for Tzaddik shares the same root as the word for justice. One of the Hebrew letters, Tzaddik, is considered by Kabbalah to be the vessel of both justice and saintliness and it is associated with the zodiac sign of Aquarius, the sign of altruism. Thus a saint who was altruistic, and a beacon of justice, ascended to the heavens on Rosh Hashanah of the Jewish Year 5871. As ram horns were blowing in synagogues around the world opening the volts of the firmaments and creating sound-tunnels to the higher-realms, the soul of the late Ruth Bader Ginsburg returned to oneness after serving the world for 87 springs.”

Go to his website at www.cosmicnagivator.com for the entire post about Saint Ruth. He has a lot more to say and all of it is significant.

I don’t know if it was the energy of change from the Jewish New Year that sped her journey along, or she decided it was time for her to go and that coincided with the New Year energy, but the wave of chaos that followed her death has been palpable. And I don’t just mean what’s happening in Washington DC with Trumpites and the Piscean Age leftover Self-Righteous-ers rushing their political agenda to ensure their power in the wake of this void. This wave has hit every one of us. And coming at the time of the Jewish New Year, it is significant.

Both the Chinese and Jewish New Years usher in a change of energy. In this case, our ambient vibration has been raised yet again, revealing more truth, i.e., that the Piscean Age leftover power mongers are stronger and more desperate than many of us perceived. We’ve been dealing with “I-can’t-believe-he-said-(or-did)-that!”-stuckness over and over since Trump got into office. Nothing stops him but we sure talk about it a lot. Now we can’t just talk about it. The Jewish New Year energy took us to a new level of required action and it won’t let up.

And tomorrow, Tuesday, September 22, the Autumnal Equinox comes into play as we enter the sign of Libra, the Scales, or Justice. A lot is going on. And it’s hard to stay positive because, well, chaos is ensuing.

While we’ve been able to see the bigger picture, it might feel like we can’t now. But that’s just the Higher Power pushing our buttons to fight for our humanity. Stay in hope, even if it seems like the fear in the gut overwhelms it. This is the culmination of our 2020 challenges. Avoid letting chaos be the ruler. It’s just the best way to clear the board so everyone is forced to play the game of life fairly.

Stay strong. Stay in hope that the Aquarian Age is already here and humanity is inevitable. We can’t always see how we get there, but it is guaranteed we do.

Remember, chaos is just order on a higher level that we don’t comprehend. Yet.

And, thank you, Saint Ruth, for your strength, wisdom, fortitude, humor and brilliant mind that knew how to maneuver the Piscean Age by playing their game better than Men-In-Power played it themselves. Rest in Power and Peace. You are greatly, greatly missed and remembered in gratitude for your inspiration.

DISCOUNT THURSDAYS
I’m still offering Discount Thursdays until we don’t need them anymore. In case you didn’t get the post, all prices for Thursday (and only Thursday) readings are discounted until further notice:
Please book through my website (www.lauriejohnsonpsychic.com). If you pass this offer to others, ask them to book via my website instead of calling, emailing or texting me. I will just send them to the website anyway. If you want to see if I have a same-day cancellation, please text to 818-943-1027 (emails and voice messages about same-day availability won’t be seen or listened to in time, so texting is best).
As usual, these special prices will not be listed on the website, nor with PayPal. For payment, I can take your credit card over the phone at the time of the call, or you can go directly to www.paypal.com and pay my account (lauriecjohnson@yahoo.com).
DISCOUNT THURSDAYS ARE HEAVILY BOOKED, BUT THERE ARE STILL OPENINGS FOR THE REST OF THE YEAR..
FYI, I am only doing phone readings at this time. We are so not done with the pandemic and the chaos that ensues because of it (plus our fun Summer of Retrogrades), so just assume all readings are by phone until further notice.
Stay safe! Stay conscious! Stay healthy!

One thought on “CHAOS ENSUES”